Chris Clement was confirmed as the Commissioner of the New Hampshire Department of Transportation! New Hampshire Governor, John Lynch stated, “Chris Clement has demonstrated strong leadership in both the private and public sector. Given his prior experience at DOT, I am confident he can immediately make a positive impact at the department in these challenging financial times.” Prior to taking over as Commissioner, Chris led the Office of Economic Stimulus, was Deputy Commissioner and Chief Operating Officer at NHDOT.

I was recently appointed to Maryland State Highway Administration’s Metropolitan District Engineer for District 4 (Baltimore and Harford Counties). Just a quick note to let you know that my experience in the Operations Academy helped me realize my long term career goal in becoming a District Engineer. Thank you for the opportunity to participate in the academy and keep up the outstanding work!

I was recently promoted to the position of Chief Traffic Operations Engineer for the State of Nevada. This is a new position in one of the first States to recognize the significance of operations as an overall DOT function. I was selected for this new position because of my background which included the “right package of experience” needed for the job. My time at the Operations Academy gave her the big picture perspective which was an important aspect of this background. I feel that customer service is an important facet of my position in that it includes the challenge of establishing a balance between the restrictions and policies of my Department and the transportation community (for example the MUTCD), and the needs of its customers (the traveling public).

Doug Tomlinson was promoted to Division Chief of the ITS Division within the Bureau of Highway Safety and Traffic Engineering of PENNDOT.

>> Read quotes from graduates of the latest Senior Management Program

Next Program:
Will be announced soon! 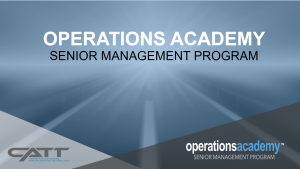 View the presentation about the Operations Academy™